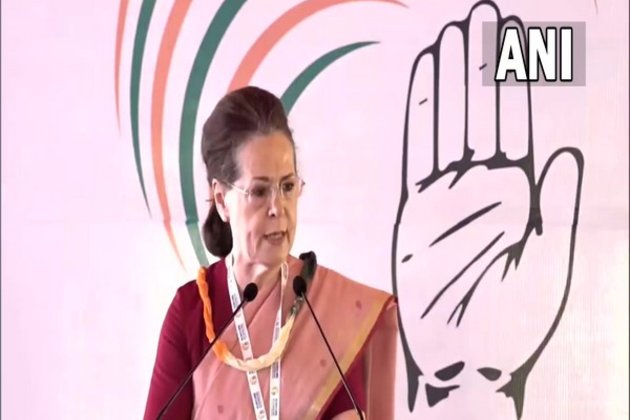 Udaipur (Rajasthan) [India], May 13 (ANI): Congress interim president Sonia Gandhi on Friday launched a scathing attack on the Narendra Modi-led BJP government at the Centre stating that the Bharatiya Janata Party (BJP) wants to keep people in a "perpetual state of frenzy" by provoking and instigating".

The remarks of Gandhi came while addressing a three-day 'Nav Sankalp Chintan Shivir' in Rajasthan's Udaipur.

Urging members of the party to combat BJP's divisiveness, Sonia Gandhi said, "Most Indians want to live in an atmosphere of peace, amity and harmony. BJP, its cohorts and surrogates want to keep people in a perpetual state of frenzy. They constantly provoke, instigate, and inflame.""We've to combat this virus of divisiveness that's being maliciously spread," she said while addressing the Chintan Shivir to discuss 'communal polarization', farmers' issues and strengthening the party for the upcoming elections.

The Congress interim president further took a jibe at the Centre's slogan 'Maximum governance, minimum government' and said that it means "viciously targeting and brutalising the minorities" of the country.

"By now it has become abundantly and painfully clear what PM Modi and his colleagues really mean by their slogan 'Maximum governance, minimum government'. It means keeping the country in a permanent state of polarisation, compelling people to live in a constant state of fear and insecurity, viciously targeting victimizing and often brutalizing minorities who're an integral part of our society and equal citizen of our republic," she said.

Talking about the Shivir, Gandhi said that it is also about "aatmachintan" (introspection) on the issues pertaining to the party.

"It is also an occasion to deliberate on the many challenges ahead of us. It is both 'Chintan' about national issues and meaningful 'aatmachintan' about our party organisation," she said.

The Congress interim president also hit out at BJP and RSS stating that the country is facing numerous "challenges due to their policies" and the Shivir gives the grand-old party an opportunity to discuss those challenges.

"'Nav Sankalp Chintan Shivir' gives us an opportunity to discuss amongst us the numerous challenges that the country is facing as a result of the policies of the BJP, RSS and its affiliates," Gandhi added.

Meanwhile, the Chintan Shivir is being held in the backdrop of the party's drubbing in the elections to five state assemblies earlier this year. The party has witnessed several electoral losses in the elections held in the past eight years. Congress has also seen the exit of some of its prominent faces. (ANI)