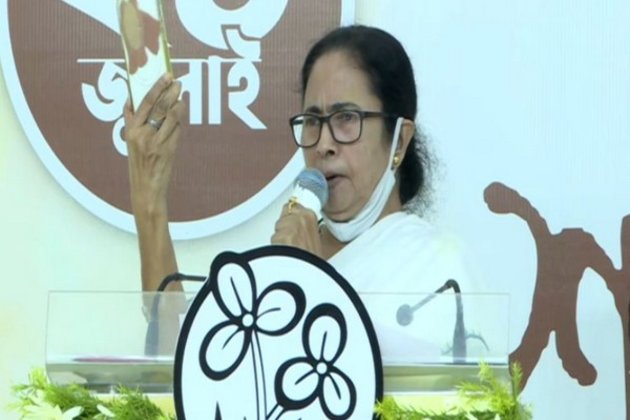 Kolkata (West Bengal) [India], July 22 (ANI): Taking a jibe at the BJP-led Central government over the ongoing Pegasus row, West Bengal Chief Minister Mamata Banerjee on Wednesday said that she has plastered her mobile's camera to avoid spying and added that the Centre should also be plastered otherwise it shall destroy the entire country.

She accused the BJP of "bulldozing the federal infrastructure of one of the largest democracies in the world.""Where is the PM Cares Fund? Who is taking care of that? And now because of Pegasus, can you imagine, I have done one thing. I am showing you. I have plastered the camera of my phone. They spy on all the audios and videos. So I have completely plastered my phone's camera. The Centre should also be plastered otherwise the country will be destroyed. BJP has bulldozed the federal structure of one of the largest democracies in the world," said Mamata while speaking during the virtual address on the occasion of Martyr's Day here on Wednesday.

She further said, "Our phones are tapped. Pegasus is dangerous. The central government, I am sorry to say, your ministers, their phone is also blocked. 'Spygiri' is going on. The phones of majority judges, police officials, political leaders have been tapped.""The Government of India collected 3.7 lakh crores from hiked taxes on petrol, diesel and petroleum products, from the public pocket. Where they are spending this money? You are paying too much money for spying. The people are not even getting vaccine and medicine for COVID-19," added the TMC supremo.

Further cornering the Central government over the ongoing Pegasus controversy, Mamata pitched for Opposition unity against the 'threat to democracy in the 'surveillance state'.

The names of over 40 Indian journalists appeared on the leaked list of potential targets for surveillance by an unidentified agency using Pegasus spyware, according to a report published in The Wire on Sunday.

According to the report, the journalists who were targeted work for some news organisations in the country including Hindustan Times, The Hindu, India Today, Indian Express and Network18. Many of them cover matters related to Defence, Home Ministry, Election Commission and Kashmir among others.

However, Union IT Minister Ashwini Vaishnaw on Monday said there is 'no substance' in the media report regarding the use of Pegasus on WhatsApp, adding that the report was an attempt to malign Indian democracy and its well-established institutions. (ANI)