As of July 2019, New York City's speed-camera network was the largest in the country with the City proposing to add 2,000 new cameras proposed to the existing system by the end of 2021. In 2019, NYC's speed-camera network was expanded to include all 750 school zones with the law requiring the cameras to start operating on extended hours and logging vehicle movement beginning at 6:00 AM and going until 10:00 PM. This means that cameras are turned off between the hours of 10:00 PM and 6:00 AM.

The Coronavirus Pandemic has exposed a great flaw in the speed-camera program. A review of "fatal crashes in 2020 shows 36% of all traffic deaths that were not on highways occurred where cameras are located, but happened during hours when they were not operating. Meanwhile, speeding was reduced by more than 70% at locations that had cameras." New York City transportation officials are proposing to bring amendments to the current law and have cameras operate 24 hours a day every day of the year.

The proposal to have 24 hour cameras can not come soon enough as the pandemic has turned New York City literally on it's head as speeding has increased NYC car wreck incidents with pedestrians, cyclists and E-bike in the late hours when cameras are turned off. Through December 16 2020, traffic incidents where people have died show a "69% increase from the same period last year and the highest number of such deaths since 2006."

Proponents of speed cameras claim they reduce car accidents and personal injuries as a result. However, some studies show that speed cameras cause an increase in rear-end collisions.

According to media reports, the city's speed camera expansion is a gradual rollout. Starting in July 2019, transportation authorities began adding 40 new cameras in various parts of the city. Reports state that the city's goal to install 750-speed cameras around school zones by the end of 2019 was delayed. "The mayor's office has installed 720 new speed cameras this year, more than had been installed in the previous six years combined. Next year, the Department of Transportation plans to continue installing them at a rate of 60 per month, with the ultimate goal of having 2,000 cameras in place by the end of 2021. That would continue to make New York City's speed camera program the largest in the country."

Most of the speed cameras are set to be installed in residential areas, where the speed limit is typically 25 miles per hour. Motorists who drive faster than 10 miles over the posted speed limit will be cited by the cameras and fined $50.

The speed camera expansion is part of New York City's Vision Zero campaign, which aims to eliminate all traffic fatalities and serious injuries by 2024.

While speaking about the installation of additional speed cameras, the commissioner of the Department of Transportation stated, "We are hopeful that we can continue to make progress on Vision Zero, where we have seen fatalities decline in New York City for five years running."

Opponents of speed cameras say they have a limited effect on car accidents and really exist as part of a money-making scheme for cities.

However, there is some data to back up the assertion that speed cameras lead to fewer traffic accident deaths and injuries. Between 2012 and 2016, car accidents in New York City fell by 15 percent. Additionally, the number of serious injuries decreased by 17 percent, and the number of deaths due to car accidents dropped by 55 percent.

While other factors may have contributed to the decrease in fatalities caused by car accidents in New York City, the data from the speed cameras can be compelling.

At the same time, there's no getting around the fact that the cameras make money for the city. Even before the speed camera expansion, the existing cameras earned the city $228 million for 5.2 million citations.

Speed cameras definitely have their supporters, but they aren't universally loved by all city planners and safety professionals. Some reports state that speed cameras, which can also be referred to as red-light cameras, actually increase the likelihood of certain types of car accidents.

Speed cameras have been installed by 438 cities across the country - a number that includes 36 out of the 50 most heavily populated cities in the United States. Because such a large number of cities have started using speed cameras, researchers can get a good idea of their effectiveness by looking at each city's car accident data.

Part of the problem is that drivers who know they're passing through an intersection that has a speed camera might be more likely to speed through the light before it turns yellow and they are issued a citation.

In Virginia, research showed that the installation of speed cameras reduced the number of cars running red lights by 67 percent.

However, when researchers analyzed Houston, which removed its speed camera program after several years, "angle" car accidents, where one car crashes into another on the front, back or side, were the only type of accident to see an increase compared to other types of accidents.

In fact, removing the speed cameras in Houston caused all other types of car accidents to drop by 18 percent.

Talk to a NYC Car Accident Lawyer About Your Case

If you have been injured in a motor vehicle accident, you owe it to yourself to speak to an experienced NYC car accident lawyer about your case. Depending on the facts of your case, you may be entitled to money damages for your pain and suffering, lost wages, future earning potential, and other damages.

There are time limits for filing a personal injury case, which is why it's important to avoid delays. Contact an NYC motor vehicle accident lawyer about your case. 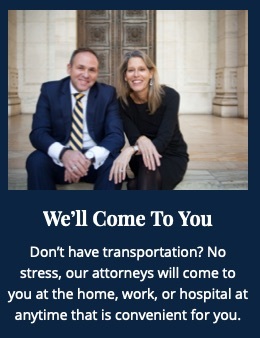 If you are a cyclist, pedestrian, scooter operator or as a driver or passenger of a car that was injured by a motor vehicle, you are entitled to have your medical bills, lost wages and other expenses paid by the No-Fault insurance policy of the motor vehicle that struck you or in which you were an occupant. (New York Insurance Law Article 51). If that motor vehicle did not carry the required insurance you can obtain insurance benefits from the Motor Vehicle Accident Indemnification Corporation (MVAIC. New York Insurance Law Article 52).

Operators of motorcycles and mopeds, however, usually are not entitled to benefits available to cyclists, pedestrians, scooter operators or drivers or passengers of motor vehicles.

The time to apply for No-Fault Insurance Benefits is short. Thus, people injured in motor vehicle crashes should not delay in making a claim to the responsible insurance company.

If you have sustained a "serious injury" from a motor vehicle crash, you are also entitled to sue for noneconomic or pain and suffering money damages. (New York Insurance Law §5102(d)). As with your No-Fault claim, it is important to speak with an experienced attorney without delay so the proper steps can be taken to protect your legal rights.